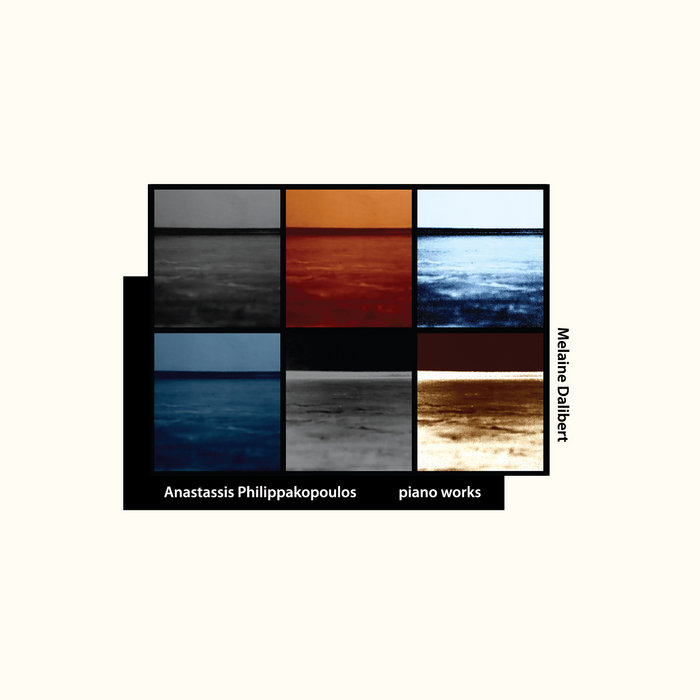 Gerrit Wessendorf I love this album because every single note and moment of silence is profound... perfection, and surprising, because I did not expect it to have the impact it had. This is something I haven't experienced listening to other minimalist classical compositions before. This album is quite literally teaching me how to listen and experience music, time and space differently.

"Dalibert never rushes, letting each tone ring out and luxuriously decay into eerie silence before moving forward. There’s a hint of Erik Satie’s melancholic beauty in the music, but Philippakopoulos prefers to reduce his elegant themes to their raw essence, trusting in the way his elliptical lines generate a quietly enveloping atmosphere. What might feel ascetic at first glance blossoms into a gorgeously meditative environment, transformed by Dalibert’s impressive sensitivity." (Peter Margasak - Daily Bandcamp)

"In the context of the most radical minimalism, each sound cell has a specific weight above the average: that's why Anastassis Philippakopoulos' short scores enacted such a simple and powerful aura, where the natural resonance - the white space of the pentagram - has an equal value with respect to the notes, of which it collects and combines the shadows and dissolves them in the air." (Michele Palozzo - Esoteros)

"There is not a wasted note throughout nor an incorrect decision by either Philippakopoulos or Dalibert. It is music which can be listened to again and again ad infinitum without losing its power to enthral and fascinate. Another stunner from Elsewhere." (John Eyles - All About Jazz)

Greek composer Anastassis Philippakopoulos has been a member of the Wandelweiser composers collective since 2003. He pursues his own compositional style to create a new kind of tonal music, deeply associated with his individuality and the surroundings of his life in Athens, which is a unique blend of stoic minimalism, the warm colors of modern romanticism, and the introspective depth of Zen.

In Philippakopoulos' piano works, each tone is closely connected with the previous and the subsequent tones via long resonances, forming a simple yet poignant melody that contains a magnetic power to draw the listener’s ears. The intensity of a single tone of his piano pieces often evokes a beautiful stone, organically formed over the course of a very long time. In fact, Philippakopoulos takes several months to a year to compose one short 2-4 minute piece.

On this album, Philippakopoulos' twelve solo piano pieces (composed from 2005-2018) are performed by a rising French composer/pianist Melaine Dalibert, who is known for a unique algorithmic compositional style as well as his interpretations of works by Giuliano D’Angiolini, Tom Johnson, Peter Garland, and many others. Here Dalibert realized the transient, meditative beauty of Philippakopoulos' piano works by inducing rich harmonics in the tranquil afterglows mysteriously tinged with shadows, brilliantly conveying the immense and profound world of Philippakopoulos' music narratively and poetically.

recorded by Herve Jegaden and David Launay at HD Studio in Saint Maugan, Britain, France on July 24, 2019
mixed and mastered by Taku Unami